PLAINS TWP. — The Northeast Pennsylvania chapter of the Quilts of Valor awarded five of their handmade, patriotic quilts to a group of U.S. armed forces veterans in a ceremony held underneath the pavilion at the Plains Township Memorial Park on Saturday.

U.S. Navy veterans Wayne Long and Paul Donlin, U.S. Army veterans Willis Ide and Dan Long and U.S. Marine Corps veteran John Richards were nominated by members of the community to receive the latest round of quilts awarded by the Quilts of Valor, the local chapter of which was founded in January of 2020 to honor local service members and veterans and to express gratitude for their service.

“It’s a wonderful feeling,” said Wayne Long before the ceremony, which saw each of the five service members presented with their quilts by members of their families, before having the quilts wrapped around them as they sat at the head of the pavilion. “It’s a great honor.”

“It’s hard to describe,” said Dan Long after he had been given his quilt. “All the work that’s been put into this, it’s incredible.”

The running joke among the five honorees, the Quilt of Valor members and just about everyone in the crowd was that, not only was this a special honor for all involved, but Saturday’s rain and chilly temperatures made it a very convenient ceremony, as well.

“It’s a perfect day for a quilt,” Wayne joked.

The ceremony was presided over by Quilts of Valor group leader Rebecca Orlowski, and several other members of the local Quilts chapter took turns reading the biographies for each service member before the quilts were presented.

“The story of the quilt is now your story,” Orlowski said.

Orlowski explained the significance of each piece of the quilts: the top, representing the individuals who contributed to it; the filling, meant to bring warmth, comfort, peace and healing; and the backing, supporting the rest of the quilt as the community aims to support its veterans.

One by one, each of the five service members was presented with their quilt, bearing their own name along with the names of the quilters who helped piece it together.

“They’re such beautiful quilts,” said Richards, who received a Purple Heart and a Silver Star among the many awards earned for his service in Vietnam as a member of the Marine Corps.

The group of honorees spanned branches of the armed forces and featured the 97-year-old Ide, who served in World War II with the U.S. Army under General George Patton and took part in the Battle of the Bulge as a member of the 135th Radio Intelligence, helping to track down German code so General Patton would know which decisions to make regarding military action.

Service was a family affair for Ide as one of twelve siblings.

“I’m one of seven brothers, and we all served,” Ide said. “And we all made it back okay.”

Most of the honorees knew this day was coming ahead of time, with one notable exception being Donlin, who was presented with his quilt by his wife, Judy.

“I thought we were going to a soccer banquet,” Donlin said, echoing remarks his wife made during the presentation. “This is really nice, it’s an honor to be recognized.” 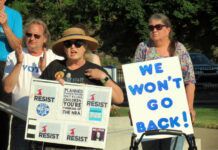 ‘We will not go back’ 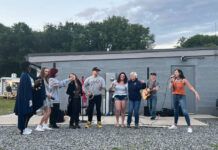 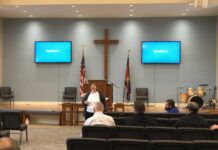