WILKES-BARRE — The massive display of giving and generosity shown by the parishioners of St. Nicholas Church on Tuesday, collecting toys and games for needy children in the parish and around the area, would surely have made the church’s namesake saint proud.

In fact, St. Nicholas said as much himself, making an appearance at the end of Tuesday’s feast day Mass in his honor to hand out some gifts (and coal), greet parishioners and challenge the congregation to perform kind acts for others — just as the saint has become known throughout the ages for doing.

“This is the time to show people that we love them, even when we don’t know them,” “St. Nicholas” said.

The feast day service featured an example of St. Nicholas’s signature compassion and generosity, a tradition that stretched back many years at the church: On the altar sat a pile of toys, books, games and other fun items for children, all collected and donated by St. Nicholas Church parishioners.

While the toy pile was already well stacked up before the Mass even started, families were invited up midway through the service to place their donated items on the altar.

“We have a great time as a parish, we bring in a lot of people to get involved in this,” said Rich Burns, a member of the parish.

Burns, recognized for his work in the parish bringing back the church’s always-popular bazaar after two years lost to the pandemic, was gifted a bag of coal from Saint Nicholas and his helper, Ruprecht.

The coal is a joking nod to both the practice of giving coal to misbehaved children on Christmas, and to the region’s history in the coal industry.

“It’s an honor, not a dubious honor but a real honor,” Burns said.

The donated toys were collected and organized with the help of Boy Scout Troop 55, a troop started this year that calls St. Nicholas Church home.

“This is a wonderful tradition, it teaches people that other folks may need help,” said Troop 55 scoutmaster Patrick Franckiewicz. “It teaches people to focus on things bigger than themselves.”

The toys will be distributed to needy families within the parish, and the remaining items will be given to charitable organizations around the area.

It was after the Mass had formally concluded that St. Nicholas himself made an appearance, dressed in white robes with a bushy white beard.

By his side was Ruprecht, this year played by 11-year-old Adam Martino, who admitted that he had a little stage fright before he appeared.

“It’s scary before you go out, but once you get out there it’s fun,” Martino said.

Even at a relatively young age, Martino was able to reflect on what makes the teachings of St. Nicholas so important and why those lessons continue to be passed down through the church.

“It’s very important,” he said. “Part of the reason why it wasn’t so scary [playing Ruprecht] is because I have fun helping people.”

Burns seconded the importance of giving, and the particular importance of passing that sentiment down to the children of the parish.

“I genuinely think that this is an opportunity for kids to learn how good it feels to give, not to get,” he said. 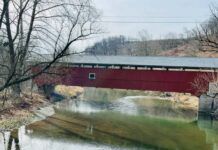 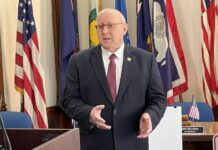 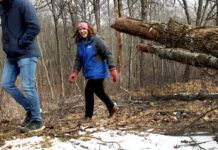