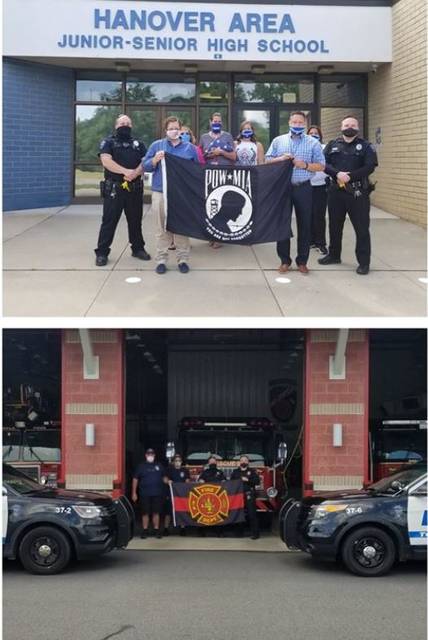 HANOVER TWP. — Township police said they have identified an 18-year-old man and two juveniles who stole American flags from the Hanover Area High School and other properties last week.

Andrew Gushock, of Hanover Township, and the two juveniles will be charged with institutional vandalism, theft and other offenses, police said.

According to a post on the Hanover Township Police Department”s Facebook page, Gushock and the two juveniles removed an American flag and a POW/MIA flag from the flag pole in front of the main entrance to the high school at 9:53 p.m. on July 8.

The theft was recorded by a surveillance camera with footage released by police.

Police said the trio continued to steal several American flags from homes in Korn Krest and Hanover Green communities in the township.

Police believe Gushock and the juveniles are responsible for stealing the American flag and a personalize firefighter memorial flag from the headquarters of the Hanover Township Fire Department on Sans Souci Parkway.

Flags belonging to the high school have been returned, police said, noting all stolen flags are believed to have been recovered.